Words with Friends: The Story Behind the Scilance Book 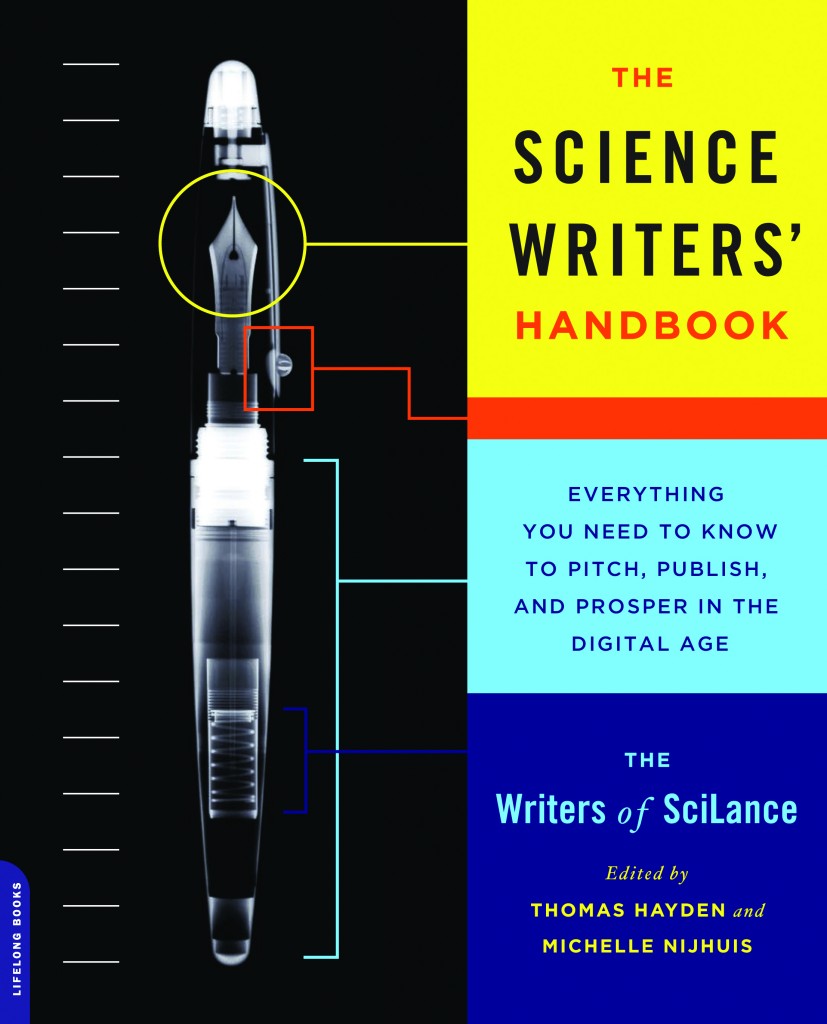 In 2005, Kendall Powell founded SciLance, an online community of 35 science writers, as a way to keep in touch with the colleagues she had met at conferences. The initial invitation to the group described it as “A network to discuss, ask advice, gripe, gossip, or otherwise virtually socialize about the business, ethics, logistics, struggles and joys of writing science journalism from home.”

That description still stands today, but the group has evolved beyond water-cooler talk to a true collective “workspace.” In 2009, when member Anne Sasso suggested that the group compile their collective wisdom about the profession  into a book, “We all half-laughed,” Powell says. The idea percolated for a while, and when the National Association of Science Writers announced their Idea Grant program in early 2011, the project finally went from pipe dream to reality.

Four years after that initial inspiration, The Science Writers’ Handbook: Everything You Need to Know to Pitch, Publish, and Prosper in the Digital Age was published this week by Da Capo Press. Yesterday, we featured an excerpt from the book: Stephen Ornes’ chapter, “By The Numbers: Essential Statistics for Science Writers.”

Today, Powell leads a discussion about how 31 SciLancers team-wrote the book. (Learn more at the book’s website, Pitch, Publish, Prosper.)

Members of Scilance participating in the discussion were:

Kendall: What was it like writing a book with 31 contributors who are also colleagues and friends?

Michelle: Surprisingly easy. It helped that SciLance had already been in existence for several years before we started the book project—we’d built up a lot of trust in each other, and we all really valued the group and its long-term health. So the disagreements that did come up during the book-writing process were easy to handle. I think we all realized they were small compared to our loyalties to the group.

The book was a challenge to edit. Not only does it include 26 chapters by 25 different authors, but each chapter also includes perspectives from several different contributors. We started out with a solid outline and the chapter drafts were excellent, but inevitably the first draft of the manuscript had a lot of repetition and some missing pieces. So Tom and I did a bunch of weeding out and filling in.

The advantages of 31 contributors far outweighed the disadvantages, though—I love that the book includes voices from a wide spectrum of science writers. There are so many ways to make a living as a science writer, and the book gives readers a good taste of the possibilities. Also, the number of contributors has made it easier to market the book. For instance, while Tom and I took the lead on the editing, Sarah Webb headed up the website and Emily Gertz planned our social-media efforts. And Anne Sasso became our number cruncher and budget wrangler. After writing a book with so many collaborators, it’s hard to imagine doing it alone—now I have a lot of respect for authors who handle all their own marketing and publicity!

Kendall: Agreed, I don’t know how solo authors do it. I’ve appreciated how much we could depend on each other for every aspect of the project. Whether it was setting up a legal entity to handle money, or knowing that other people would post to Facebook, or doing “insta-edits” on some promotional copy needed ASAP and having three sets of eyes to make it shine.

Kendall: How did you come up with the structure for the book?

Tom: The idea for structuring the book in three thematic sections arose early. Originally we called it “Craft, Community and Commerce” back then, and I still think of those as the three pillars of a successful career in science writing. (There was a fourth potential pillar—“Complaints, Crises, and Conundrums”—but we soon realized those particular Cs cut across the other three!) [Kendall interjects: Wait, I thought the fourth C was Cussing?]

We knew that we wanted to write the book in much the same way that we built the community of SciLance—as a group of quite independent individuals, who each benefitted from the experience of the others, even when there were differences in approach. Initially, we thought we’d write much of the book by mining past SciLance threads. Ultimately, though, the great majority of the material was new. Most of the chapters still draw on the “SciLance brain,” though—authors asked new questions of the list, rather than relying on past conversations. I’m awfully glad we did—it makes for a much fresher, more intentional guide.

Kendall: How did you decide who was going to write each chapter?

Tom: It was carefully orchestrated chaos, with a focus that each contributor would write chapters he or she was truly excited to write. In September 2011, we posted a signup sheet with the proposed list of chapters and sidebars, and contributors added their names to chapters they were interested in writing. Some chose chapters they’d initially proposed, some chose topics close to their hearts, and some chose subjects they wanted to learn more about. Some chose the same chapters and a few unlovely chapters were not selected. Alison Fromme, one of our project managers, did a masterful job of matchmaking through gentle peer pressure and delicate diplomacy to find every chapter a willing author, and every willing author a chapter.

Then, the authors had a week to revise their chapter titles and descriptions. I think that was a crucial step—whether authors had proposed the chapter initially or not, we wanted to be sure that each of us took ownership over the material we would contribute, and shape and frame it as individual writers within the larger framework of the book.

Kendall: Why did you include chapters that covered “soft skills,” such as Hillary Rosner’s on handling rejection?

Tom: Actually, Christie Aschwanden, a SciLance member at the time and an early enthusiast for the project, played an important role in setting that tone. I recently found a 2009 note from Christie advocating that overall, the book should be “more of a ‘how to survive as a freelancer’ than a ‘how to write kick-ass queries and stories.’ All the stuff that writing books never address.”

Hillary: I’m not sure I’d call handling rejection a soft skill…it’s as hard as it gets!

Kendall: Hillary, was it hard baring your soul about how you handle rejection with the whole science writing community?

Hillary: Not at all. I’ve had a lot of rejection over the course of my career, and I’m more than happy to share it around. Seriously, though, I do think that learning to deal with rejection is an essential part of surviving as a writer. (Please remind me of that the next time I’m hiding in bed, wallowing in self-pity.) It totally sucks … but it’s gonna happen, and if you can’t pick yourself up and get back to work, you’re never going to earn a living. So writing the chapter was kind of cathartic, and it reminded me of just how important it is to learn to cope.

That said, I’d be much happier if everyone would just tell me how great I am and throw money at me every time I type a sentence.

Kendall: How did you keep the wheels moving on a project with so many team members, most of whom are freelancers with their own busy assignment calendars?

Michelle: Again I think the trust within SciLance helped us here. Everyone was really considerate of Tom and me as editors, and made time for drafts and revisions as we needed them. I think editing a book with 30-plus contributors who were strangers might have been a very different situation.

Kendall: It helped tremendously that we had a “book team” in place to handle different aspects. It was handy to have seven people who could divide and conquer when it came to the almost-daily decisions to be made or the inevitable hiccups of legal issues, contract negotiations, decisions about cover art, blurbs for the back cover, etc. At least one of us would have a cool head or a brilliant insight for discussions with our agent, editor, or publicist.

Kendall: Did you have to deploy the “deadline flogger” at any time?

Stephen: I may have gotten flogged, but there aren’t any scars.

Kendall: I think Tom and I were actually the very last people to turn in our copy. We both made the silly decision to add babies to our families during that year. Yep, I blame it on the kids.

Kendall: Was it hard editing (and being edited by) friends?

Tom: I was deeply impressed by the professionalism and good natured acceptance of feedback and editing of all the SciLancers I edited. That doesn’t mean it wasn’t challenging—I was at every moment aware not only of potential hurt feelings and wounded egos, but also of the stinging emails we sometimes send about particularly chowder-headed editing decisions perpetrated on our outside work. Fortunately, if emails with the subject line “RANT: Hayden has ruined my chapter again!” were sent, I was left off the distribution list.

Hillary: OMG, it totally was NOT me who sent that email.

Michelle: Ha! I’ll second Tom on this—editing is a personal process in a lot of ways, and as an editor you sometimes feel like you’re sitting on the priest’s side of the confessional, seeing different writers’ first drafts and their different responses to edits. So while there were times when I felt nervous about taking friends into that metaphorical confessional, everyone handled the situation professionally and with good humor—I was so grateful for that.

Stephen: I didn’t know Tom and Michelle very well before the book work started in earnest, so I didn’t know how ruthless the editing and revising process would be. It wasn’t ruthless, though for some reason they didn’t want a 50-page chapter on statistics. (Go figure.) Both turned out to be generous, smart, and savvy, which made the process so productive. The final products far surpassed my original drafts.

Kendall: Stephen, you are now editing pieces on the book’s blog, including the multimedia pieces. Does that give you newfound appreciation for your own editors?

Stephen: Lord, yes. I’ve been lucky to work with many other good editors, and I’m doing my best to emulate their styles, generosity, and approach to making suggestions. I’m striving to be a “writer’s editor.” I’ve edited a number of multimedia pieces—slideshows and videos—and it’s fun to get a peek into other writers’ lives. When I worked with Mark Schrope on his Writing Labs piece, I kept thinking, “Why don’t I have a hammock in my office?”

Kendall: Did any awkward situations arise? How did you get through them?

Tom: I had to kill my own wife’s sidebar giving the spousal view of freelancing. Purely for reasons of space—our manuscript was several scores of pages too long, and our editor at Da Capo asked us to cut back substantially on the number of boxes and sidebars. Fortunately, Erika was a total pro about it, and I came out of the situation with nothing worse than KP duty for the next three years.

Kendall: What has been the most fun part of the project?

Stephen: I still can’t believe it happened. After I joined SciLance, I read the ongoing threads and was treated to myriad inside jokes about books and hot tubs and wrestling with PIOs. I didn’t think these people were serious about writing a book. …

Kendall: Opening up a box and pulling out a real, live book with my name on the contributor page, nestled among those of some of my closest friends. As a writer, it really doesn’t get much better than that, does it?

Michelle: Getting to share all the little steps of process with colleagues and good friends. As a solo author, your friends might congratulate you when you get your cover or when the book goes up on Amazon, but it’s been even more fun to be able to toast one another each time we’ve reached a milestone.