Butterfly On A Bullet

It was the best of assignments and the worst. My editors John Carroll and Ashley Dunn at the Los Angeles Times asked me to take readers behind the scenes of the largest and most public accident investigation in U.S. history—and one of the most heavily covered national news events of the 21st century—the inquiry into the 2003 wreck of the space shuttle Columbia.

It came with a caveat: I could write nothing until the official findings had been made public. Others would handle our daily news coverage. As it turned out, there were 21,000 news stories published about the accident investigation board and about 38,000 news stories on the Columbia accident itself before I could type a word of my first draft.

No suspense. No surprise. No scoop. A reporter’s nightmare. 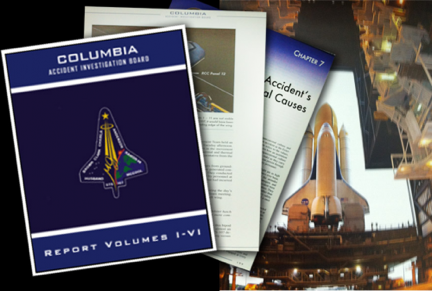 While unique in some ways, the assignment presaged the problems of every significant news event today: fragmentation of news coverage, speed of delivery, the public scrutiny of the Internet flash mob, the flood of information resources, the intermingling of official and unofficial sources, and the over-riding problems of credibility and reliability.

In that sense, it is the perfect model of a long-form freelance assignment, in which a writer often comes to the cold embers of a story over-reported in the daily press, blogged to death, and picked clean by Twitter and Reddit—and then somehow must make it new again.

The result was Butterfly On A Bullet, a six-part series called published by the Los Angeles Times in December 2003. It took six months to report; about six weeks to write and edit.

It was a finalist for the 2004 Pulitzer Prize in Feature Writing and won the non-deadline reporting award from the Society for Professional Journalists and the Communications Award from the National Academy of Sciences.

I have covered complex science issues for a quarter century; yet I still rely most on the simple lessons I learned by trial and error during my first assignments as a raw reporter on a small Virginia country daily.

By necessity, we start with an expectation of what we hope to find, with a narrative template already in mind. Under deadline pressure, we anxiously sprint for the money quote and the hard lede. The gravitational pull of what New York University press critic Jay Rosen called the master narrative of a major national news story can be all but irresistible. It can blind a reporter to what sources are trying to show him, make a reporter deaf to what they are trying so hard to tell him.

Give your curiosity free rein. Trust your instincts. Wander up the blind alleys. One of them will lead to the heart of a story.

You Cannot Write What You Have Not Reported

At every stage, pay meticulous attention to sensory detail. Gather the facts of the senses that can later make the story come alive. Colors. Sounds. Smells. Textures. Pay the same attention to personal detail: what people wear, their hobbies, the family photos on their desk. They all are revealing pieces of the mosaic of human character.

These concrete details make a story come alive, make it unique, and lend it the credibility of fact.

Science is a literature of fact.

We are in the business of non-fiction. Therefore: no composite characters. No pseudonyms. Make nothing up. Attribution matters. The reader has a right to know how you know what you know.

Look People in the Eye

Turn off the computer. Hang up the phone and get out of the office. Talk to people directly. Hang out in laboratories.

For Butterfly on a Bullet, I knocked on doors in nine cities, from Huntsville to Boston. It was time-consuming, lonely, expensive and yet always revealing. The further I went away from official news events—formal research papers and conferences—the more I learned.

Look for someone who can help you find your way into a story. It may be someone with an axe to grind or someone who genuinely wants to advance public understanding of a controversy.

My guide was a member of the accident investigation board whose sense of public calling was so strong that he wore his Naval Academy ring on the same finger as his wedding band. On the day I first interviewed him, the house where we met was literally at the end of a rainbow.

Organize as You Go

File everything immediately so you can find it later when you need it most.

I had too much information. The series encompassed 130 interviews with accident investigators, astronomers, engineering academics, and NASA employees across the United States. I reviewed dozens of technical papers, accident reports and books.

To digest it all, I built a searchable computer database, updating it every day. And I typed up summaries of impressions, thoughts and possible follow-ups after every interview session. On a PC system, I used a data base program called askSam, a free-form data base that inhales Web pages, email, PDF files, texts, and Word documents. Since switching to a Mac system, I use a database program called DEVONthink.

I relied most on the 10 yellow legal pads of hand-written interview notes, indexed and color-coded by topic.

Then I created a rough story outline in Word. I threw everything in its approximate place—facts, quotes, thoughts. I used Word’s footnote function to identify the original source of each item. That way when I moved something, its source note automatically kept track with it.

Begin in the Middle

Start a first draft anywhere. The lede can come later. The important thing is to begin writing. Draft in chunks of text. Don’t worry about the order in which they belong. They can be rearranged—or discarded—later.

For me, finding the narrative was a problem. I was crippled by doubt about how to create suspense, surprise or hold a reader’s interest when so much was already known. So I wrote the first draft in chronological order.

Persist. There is no such thing as writer’s block. If you find yourself stuck at the keyboard, it is almost always because you have not given yourself enough time to report a point in enough depth. You can’t write what you don’t understand.

Find a Sounding Board

Everyone needs a reality check. This ought to be someone who you trust and whose advice you value highly but can safely ignore. For me, that person was Los Angeles Times editor Rick Meyer, to whom I did not officially report. He found the lede buried in my chronology. Most importantly, he gave me confidence that I had a fresh, untold story in hand.

I discovered a narrative of revelation.

This was the story, not of the accident and the astronauts who died, but of an investigation and the unlikely characters who conducted it. That fundamental shift in point of view launched the arc of the narrative in a different direction: A generation of NASA managers had turned engineering on its head, viewing evidence of failure as signs of success. How did we finally persuade ourselves of a truth we had long denied?

One crewmember didn’t wear a space helmet, so smooth was the descent.

Too elated to bother, or perhaps too confident, three of them did not put on their orange pressure suit gloves.

On the flight deck, Columbia commander Rick Husband chugged down three plastic flagons of saline solution to keep from getting light-headed, a common side-effect of reentry. It had the brackish tang of the sea. Pilot William McCool pored over a pre-landing checklist. Crewmembers Kalpana Chawla and Laurel Clark, sitting behind him with a video camera, watched raptly as superheated gasses licked across the cabin windows.

The seven men and women aboard the space shuttle were plunging out of orbit into the atmosphere over the South Pacific on the last leg of a journey that 22 years of repetition had turned into a NASA routine. For 16 days, they had circled the earth. Now they could return.

James Hallock discovered just how little it takes to bring down a space shuttle.

He did it by playing with pencils.

As a member of the Columbia Accident Investigation Board, the pear-shaped, bewhiskered expert on flight safety had a New Englander’s flinty skepticism and a physicist’s distaste for untested accident theories.

On this day, Hallock, 62, scowled at specifications for the reinforced carbon panels that shielded the leading edge of Columbia’s wings from the heat of reentry.

If one of the $800,000 panels had cracked, it might have been the flaw that on Feb. 1 caused the $1.8-billion spacecraft and its crew of seven astronauts to plummet in a shower of molten debris across six states.

Hallock brooded over a simple question: What would it take to break one?

LA Times editors John Carroll and Ashley Dunn took me through a formal three-stage editing process. We decided each installment should fit on a single page of newsprint, including graphics. That meant each installment could be no more than about 2,100 words.

On the first pass, we edited the overall series for chapter structure; on the second pass, we edited each chapter for story; then for the third pass, we line-edited word-by-word. We strived for a kind of streamlined writing that mirrored the forensic factual quality of the investigation itself—a language suitable for the literature of fact.

I worked to make every word carry the weight of the story, with an emphasis on verbs. Verbs are life. Past tense or present tense, every sentence must balance on a verb.

All told, I went through 32 drafts.

Stories Have a Destination

Every good story is a journey of discovery. They begin, but they also end. Write the ending with the same care you write the lede. Write the beginning with the end in view.

All that the investigators discovered reinforced what Hallock learned by dropping his No. 2 pencils: The space shuttles were by design unsafe. In the end, what the accident changed most were the lives of the people involved.

A mystery can transform those who pursue it. The people involved in the Columbia inquest may never be free of it. Memories have a life of their own. Regrets linger.

Should they start to fade, there will be reminders.

Just a few weeks ago near Chireno, Texas, a farmer feeding his cattle discovered a jagged piece of alloy about the size of a fountain pen jammed in a bale of hay.

He took it to the county sheriff, who duly sent it by overnight express to NASA.

It was another piece of Columbia.

They turn up about once a week.

Robert Lee Hotz is a science writer at The Wall Street Journal, where he reports on science, medicine and technology. He is president of the Alicia Patterson Foundation, which funds independent journalism projects around the world, and a Distinguished Writer in Residence at New York University’s Carter Institute of Journalism.