During the late 1960s and early 1970s, hijackers commandeered U.S. flights on an almost regular basis. And the hijackers themselves were usually American: often idealistic and sometimes mentally unstable protesters, or, later, the down-and-out intent on ransom. Airlines treated the phenomena a cost of doing business.

A few years ago, Brendan Koerner discovered this episode in American history through a news story about a Puerto Rican hijacker who’d been arrested after 40 years on the run. In The Skies Belong to Us, Koerner recreates a time in aviation history that even many of today’s pilots have forgotten and tells the story of a young couple turned international hijackers.

Robin Mejia  spoke with Koerner about how he created this book with the help of a storyboarding technique inspired by film producer Spike Lee. (This interview has been edited for length and clarity.)

Your project started with the story of a Puerto Rican guy who had been on the run for four decades. But that’s not the story you wrote about.

No, it’s not. I got really interested in that era and the phenomenon of hijacking in America through that story, and I started looking around to see if there were any stories from that era that needed to be told. I looked at a lot of cases, particularly of those that got away with it, either for months or years. They were primarily men. And as I was looking at these stories, one name kind of popped out at me—Catherine Kerkow, this 20-year-old from Coos Bay, Oregon.  She was a woman in a pretty much male pursuit of hijacking, but I was also intrigued by the fact that she was from a small town, that she was so young, and she didn’t have any apparent reason for hijacking the plane—no known political affiliations or motive. It kind of evolved from there.

How did you start to look into the history of hijackings during that era?

There wasn’t some master compendium of hijackings, which was a little surprising to me. I thought it would be easier to find chronological lists, but it wasn’t. So I started poking around newspaper archives and doing keyword searches and seeing what I could come up with. It was certainly difficult because of the sheer volume of hijackings in this era.  There were 159 of these in America alone. In the period from 1961 to 1972, there were 130.

When you were doing this, did you already have the feeling it was a book or did you think it might be a magazine story?

I came across the information suggesting that this Kerkow and her boyfriend, Roger Holder, who did the hijacking with her, had actually crossed paths as children in Coos Bay. It just seemed like a fantastic coincidence. That was really the moment when I knew it was a book.

Once you decided to pursue this, what was your research process?

There are two tracks in the book. One is the specific story of Kerkow and Holder and their hijacking and their backstory as well as the drama on the plane itself. So a lot of that was picking up the phone and tracking down people who had been on the airplane with them, and trying to find people who had known them, and trying to find the hijackers themselves. So that was one strand.

The other strand was trying to get a historical sense of this period in American history, and trying to paint a picture of the rise and fall of hijacking as a criminal and cultural phenomenon. A lot of that involved reading scholarly studies and looking at the newspaper archives to get a timeline going. There was no real available timeline; I had to make that from scratch.

So you’ve got this large volume of material. How do you organize your reporting and research?

It’s tricky. I keep a running list and a folder of what intrigues me the most. It’s kind of a mapping of artifacts, and a lot of it is a gut level decision. I’ll come across a document, and I’ll be like, “Well, I don’t know how this will fit into the story, but there’s something about it that strikes me so I’ll probably mention it somewhere because it’s such a great factoid, or it somehow evokes something important.”  So, I put it in that ideas folder. A lot of it initially is getting a mishmash of artifacts that strike me as essential to the story, and then stepping back and really thinking about it.

I like to work chronologically. There’s a little time shifting in this book, but not a lot. It’s a fairly linear narrative. And so that makes my task somewhat manageable. I know early on that I’m going to try to make things as linear as possible in the two narratives. That’s the organizing principle when I look at all these random artifacts I’ve aggregated in my ideas folder. And I can kind of start to put a little form and a little shape on them.

Yeah, they do. The Cathy-and-Roger narrative starts in ’72, [then] goes to their background and brings them up through the ’50s and ’60s, up to ’72. The hijacking narrative starts actually in the ’40s and brings us along. So there’s a little bit of a discrepancy at first, but as the book moves along, you eventually get them to synch perfectly. I thought of that medical symbol of two serpents coiling around the staff. That’s the way I thought about the narrative. You have these two things that are kind of separate, and they coil around the backbone of the book, and eventually they end up intermingling.

You took a similar approach in your book Now The Hell Will Start.

Yeah, it was the same kind of thing where I had two narratives. I had a personal narrative about this young man hunted in the jungle against the backdrop of segregation in the military. That was a little bit of a wilder and woolier project. I think that was probably because it was my first book, and I was kind of making it up as I went along. I started learning on the job in a lot of ways.

When did you start storyboarding as part of your organizational process?

The storyboarding part actually goes back not to the writing of [Now the Hell Will Start], but when I got the chance to adapt it for a screenplay. Spike Lee optioned the book, and he also hired me to write the screenplay. He called me and said, “I want you to come into my office and just show me what you’re going to do.” And I just had this freaked-out moment wondering how I could communicate to this great artist what I want to do in the screenplay. I felt if I came to him with a written outline, it wouldn’t quite process for him because, obviously, he’s a director. He has to think visually.

I decided to just put together a sketch of the images sequenced in the order that I saw the screenplay unfolding. Some of these images were things from my archives, things I had amassed while researching the book. Some of them were stock images that I used to fill in gaps so that I would have something. A lot of them were documents or newspaper headlines that I would clip out to indicate parts of the action. And when I presented to him, I could just tell that it really clicked for him. It clicked for me.

And I realized that I didn’t just have to do this when I was doing screenwriting—I could do this for anything, really. So I started adopting that strategy for narrative projects. I wrote [“Piano Demon,”] the first piece for The Atavist, which really put these principles in action with the way I incorporate images and sounds.

Here, I assembled my images in the sequence I thought I saw the book going in, and I gave them each two- or three-line captions that described the action and the flow and the ideas present in the narrative. I think there were about 208 sequenced images in the final storyboard for The Skies Belong to Us.

So this has become a standard procedure?

A lot of times, it’s the first thing I do now after the research and reporting. Before I sit down to write, I don’t write an outline. I sit down and I assemble storyboards with the document scans and clipped headlines and as many photos as I can, and that has been a real boon to my process.

Why do you prefer storyboards over traditional outlines?

For one thing, it helps me see the story in my mind’s eye a lot better. It’s a way to actually see it unfold. I can see the characters a lot more clearly. I can see the environment they’re inhabiting. I think that in terms of writing, it helps me get unstuck when I’m writing because I kind of feel I can just move on if I’m having trouble with a scene. I can just leave it there. I know I have a placeholder. I can come back to it. So I can segue and jump to the next image in the sequence and write that scene and come back to the one that’s giving me problems. I don’t get as frustrated in the writing process. With outlines, it’s just a little bit harder for me to do that—I can’t visually see what’s coming next. I feel like I have to write each part in sequence for it to work.

Did doing this help you more quickly get a handle on your second book, compared with your first?

No question. I wouldn’t say it was easier. It was harder in a lot of ways because I think it was a more challenging project, and I think I was even more emotionally invested in this one, in some ways. But certainly going into it, I understood what some of the roadblocks would be, what some of the obstacles would be creatively and just energetically. So, in that sense, I felt much, much better prepared for it than the first time out.

Who do you get feedback from along the way?

Not many people. I’m the kind of person that doesn’t open up too much about their creative endeavors until I really feel that they’re ready for prime time. So, honestly, the only people who read it while it was a work-in-progress were my editor, Vanessa Mobley at Crown, and my wife. I really feel uncomfortable sharing something I don’t feel 100 percent certain about to people outside a very, very, very small circle.

What would you tell someone who’s thinking about writing a book?

Writing a book, as my editor says, is a marathon, not a sprint. That’s the biggest thing I’ve learned from doing these two books. It’s a really, really time consuming process. It’s definitely something you have to commit yourself to 100 percent, and it will use a couple of years of your life.

A glimpse behind the scenes: 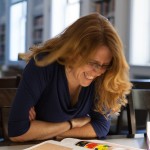 Robin Mejia lives in Berkeley, California, where she’s working on a Ph.D. in biostatistics and occasionally blogging. Her stories have appeared in Mother Jones, Wired, The Washington Post Magazine and other outlets, and she’s a contributor to The Science Writers’ Handbook. Follow Robin on Twitter @RobinMejia.