Tools: Sipping from the Internet Firehose

But I know that working smarter, not harder, is vital to a productive freelance career. Good stories lurk in all the blogs, posts, and tweets in the world, waiting to be told. I just need tools to organize them. Here are two that help me get a grip on the information onslaught.

Until about a year ago, Twitter didn’t make sense to me. Like many new users, I dutifully posted links and 140-character thoughts without much direction. I’d scroll and scroll as the tweets piled up and think, “Who has time to read through all of this?”

I have tried some social media management tools, including Hootsuite, which allows you to manage all of your social media accounts in one place. But since I’m only using Twitter, I wanted something built specifically for it.

The answer came in Tweetdeck, a free, sleek and intuitive tool for organizing the firehose of Tweets that enter your Twitter account, creating customized feeds (as many as you’d like) for interactions with other Twitter users; lists of like-minded tweeters; searches; and trends.

There are lots of ways to use Tweetdeck to find stories, but the two biggies (for me) are Lists and Searches.

If you are like I was, and only read tweets through your home news feed, it’s time for a little spring cleaning. Lists are essential to staying sane on Twitter by aggregating similar voices into one place. They’re kind of a hidden feature on Twitter.com, but can take front-and-center on Tweetdeck.

You can make your own list or subscribe to other users’ lists. This latter route is great because it saves you legwork. Find others’ lists by going to someone’s homepage and clicking “Lists” to see what they’ve made. One of my favorite finds is Danielle Lee’s “Diverse Science Writers” because it’s something I care about, and I trust her to follow people who are reliable, relevant and fun to read.

Crafting your own list, however, lets you curate exactly what you want. It also has the added perk of notifying potential connections or sources when you add them to your list. For more on this feature, read Laika’s MedLibLog how-to on curating lists.

I like to follow a healthy balance of newsmakers and news writers. For example, I have a list titled “Geology Tweets” that includes professors and funny grad students who help me keep abreast of the latest in research. I follow the Society of Environmental Journalists’ “SEJ Members” list to know what my peers are talking about. I also compile Twitter accounts from nearby communities and universities to look for local story potential. Do what feels right for you and your beat.

I tend to use searches for issues I’m writing about, to follow science or journalism conferences, and on a short-term basis for trending news. You can search for hashtags or keywords in Tweetdeck, then hit “Add Column” to  create a feed  of collated tweets. For instance, during the Science Online Together conference a few weeks ago, I kept an eye on the #scio14 hashtag. While people exchanged ideas, links and opinions, I could be in on it without traveling to North Carolina. It is one of the beautiful things that makes Twitter so powerful. 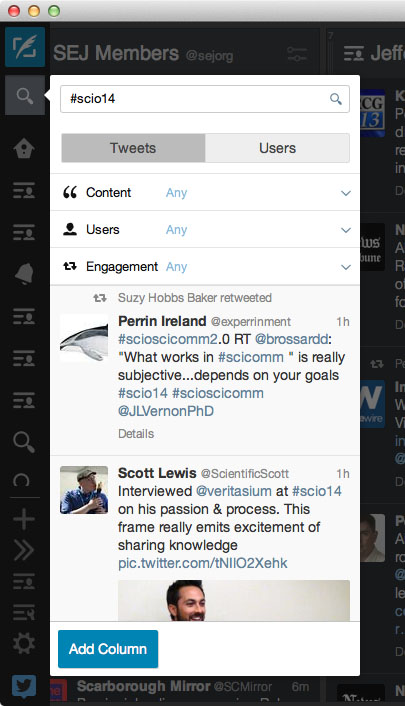 The search tool is also handy for tracking projects you’re following. I’ve been working on a story about the Flanagan South oil pipeline, so I’ve kept a “Flanagan South” search column open. During construction, I watched Tweets about it trickle in from people working on the line and local newspapers writing about its progress. When ThinkProgress posted an article about the project, I saw how people reacted. 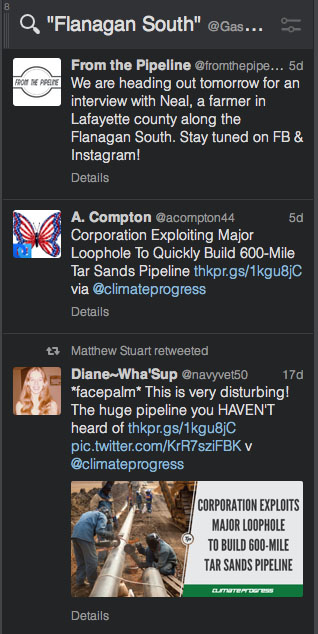 While Twitter broadcasts fleeting thoughts, blog posts flesh them out, and can be more useful for reporting. I follow news sites, environmental organizations, local naturalist groups, scientists and friends who are passionate about what they do. They often produce original content I’d never know from press releases or other journalistic encounters, and I like being part of those communities by commenting and sharing. But to keep up with everything, I needed a way to track all the blogs at once.

For a while, users bemoaned the death of Google Reader, which aggregated RSS and Atom feeds into one location for easy reference. After it closed last year, several feed reader startups rose to fill the cyber emptiness. Like Goldilocks, I tested out a few applications before settling on one. I found The Old Reader to be a bit disorganized, Pulse and Flipboard too reliant on images, and NetVibes more trouble than it was worth. That said, each one has fans, and maybe they know something I don’t. [editor’s note: please share in the comments!]

Feedly gets my vote as the best feed reader on the market. It’s free and looks simple, but is a very powerful tool. You can sort blogs into categories, tag them, archive posts to Evernote or Pinterest, and share posts through social media all from one page. Keyboard shortcuts help you flip through content quickly, and you can choose various displays depending on your needs. For instance, I want to see picture thumbnails for my Science Illustration blogs, but only the headlines on environmental stories. 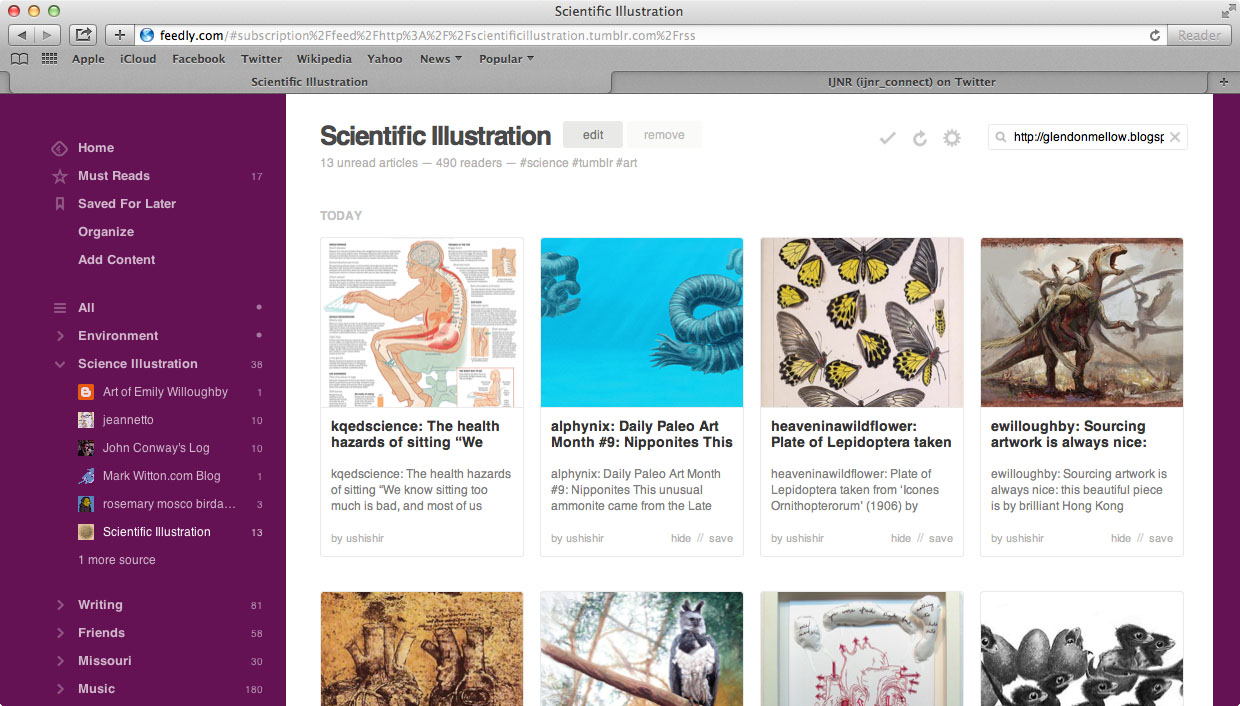 Feed readers don’t necessarily have to track blogs. Most news websites have RSS feeds as well. Just click on the universal RSS symbol and enter that URL in the Feedly search to add it to your reader. Personally, I found it overwhelming to follow news this way, but it’s an option.

So let’s review: I put tweets and blogs into boxes. I put those boxes onto one screen. I can only keep up with about seven feeds or blog categories at a time before the web world gets messy again. Do I spend any less time on the Internet? Probably not. Now, however, I browse more purposefully and feel more in-control.

And that is a feat worth blogging about.

Tina Casagrand is a TON fellow sponsored by the Burroughs Wellcome Fund. She is freelance journalist and recent graduate of the University of Missouri School of Journalism, where she studied magazine writing and publishing, anthropology, biology, and art. All of her Twitter followers are totally rad.