When I set out to write an essay handbook for science writers, the first problem I ran into is that no one is quite sure how to define an essay. Aldous Huxley wrote that it was “a literary device for saying almost everything about almost anything.” Mathematician and science writer Martin Gardner wrote that it has “irresponsible boundaries.”

Here’s the definition I came up with: Essays are written in a personal voice, involve one or more journeys, and are relevant not just to the writer but also to the reader.

Like good science, good essays start with a question. While scientists test their hypotheses through experiments in the laboratory or the field, essayists search for answers through interviewing, reading, and the process of writing and revising. Both scientists and essayists acknowledge that their conclusions are provisional. But by collecting reliable data and thinking clearly and creatively, scientists and essayists alike contribute to a larger, longer conversation.Essays are not diatribes or rants; they’re not straight news; and they’re definitely not those five-paragraph papers you had to write in high school, which don’t start with a question but with a foregone conclusion.

Though the essay form is more than four hundred years old, it’s perfectly suited to the digital age—and to science writing. Personal voice allows writers to go beyond simple “translation” of scientific results, providing the context and analysis so valuable to modern readers. It’s increasingly used to explore broader questions in feature stories, multimedia productions, blog posts, and many forms of social media. So no matter what kind of science storyteller you happen to be, essay-writing skills will serve you well. 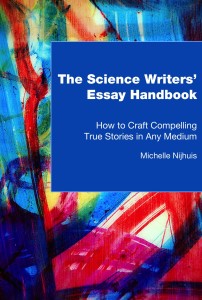 In her essay “Pathologies,” published in her book Sightlines, Kathleen Jamie writes: “I had some turning in my head, though I didn’t raise my hand. About ‘nature,’ mostly, which we were exhorted to reconnect with. What was it, exactly, and where did it reside?”

For me, essays usually begin with a “turning in my head,” a persistent question that sets me off on a journey of discovery. That journey—physical, emotional, intellectual, or some combination of the above—often becomes the structure of the essay. For an essay I wrote about reactions to the Paris climate agreement, my question was, “Why are more experienced climate journalists so much grumpier about this than I am?” For a reported essay I wrote about the future of coal power, my question was, “Does ‘clean coal’ technology have a role in a low-carbon future?” For an essay about waiting for Benedict Cumberbatch at a stage door in London, my question was, “Er … so why exactly did I fly across the ocean to see this guy play Hamlet?”

As I researched and wrote these essays, the questions I started with became broader questions about the influence of experience on expectations, the role of government in innovation, and the value of drama—questions that I hope were relevant not just to me, but to my audience, too.

The screenwriter John Yorke argues that almost every story can be divided into three major acts: In act 1, the protagonist enters or is thrust into a new world; in act 2, the protagonist struggles against an antagonist or opposing force; in act 3, the protagonist integrates old and new. In most essays, the writer functions as the protagonist, and his or her journey follows this standard three-part structure. But there’s a twist: Instead of Darth Vader or the Joker or a murderous stepfather, the essayist grapples with an existing story—either a literal tale or some sort of assumption. Instead of returning from his or her journey with a lightsaber or the One Ring, the protagonist of an essay “comes back” with a new “story”—a new way of seeing the world.

This is most obvious in purely critical essays, where the writer analyzes a constructed story such as a movie or a play. But it’s true in every essay I can think of. In “Pathologies,” for example, Jamie confronts the “story” that humans are supposed to connect with nature. In “A Scientist Dying Young,” in his book A Sense of the Mysterious, Alan Lightman ponders the story that his research career has peaked. In “How to Stop a Tsunami in Three Easy Steps,” an essay from The Last Word on Nothing, Heather Abel dispels the story that children react to fear in simple, predictable ways. In “Archimedes in the Fence,” also from The Last Word on Nothing, Stephen Ornes finds mathematical elegance in an insect considered a backyard pest.

So when you set out to write an essay, identify your triggering question, and identify the existing story that will serve as your “antagonist.” As you seek answers to your question through research, interviews, and reflection, a new story will unfold. Your job is to share it with us.

Michelle Nijhuis is the author of The Science Writers’ Essay Handbook: How to Craft Compelling True Stories in Any Medium. Her essays about science and the environment appear in The New Yorker’s blog Elements, The Last Word on Nothing, and elsewhere. Follow her on Twitter @nijhuism.