Elizabeth DeVita-Raeburn on The Death of Cancer

Most people are familiar with the devastating effects of malignancies and with the so-called War on Cancer, the U.S. government’s intensified focus on cancer research, beginning in the 1970s. But few have witnessed firsthand the ups and downs of trying to treat a deadly disease: the frequent deaths, the endless suffering, the bureaucracy and egos that halt progress, and—much more rarely—the extraordinary experience of discovering a lifesaving therapy.

Elizabeth DeVita-Raeburn all but grew up at the National Institutes of Health. While her brother, who died of aplastic anemia when she was 14, was sequestered in a hospital room there, her father, Vincent DeVita, was desperately developing treatments for cancer one floor below. He’d pioneered a curative regimen for Hodgkin’s disease there in the 1960s, continued to test new combinations of chemotherapy, and served as director of the National Cancer Institute from 1980 to 1988. Chemotherapy became a standard part of cancer treatment largely through his efforts.

In The Death of Cancer, DeVita-Raeburn helps her father, now a professor at the Yale School of Medicine,* tell the story of his years immersed in the War on Cancer: the daily battles, the victories large and small, and the unceasing frustrations.

Here, DeVita-Raeburn tells Jessica Wapner about what it was like to write a book with her father. Largely through reams of text messages, father and daughter pieced together a history at once deeply personal and broadly relevant. The result is a galvanizing story that shows what stands in the way of medical progress and also celebrates the genuinely significant strides that have been made in the treatment of cancer in the past several decades. (This interview has been edited for length and clarity.)

How did the idea for this book come about?

My father and I began speaking about writing a book during my first years as a freelance writer in the early 1990s. He had a longstanding frustration with inaccurate reporting about the War on Cancer. He also thought there was a lot of general misperception about it, and believed people should know about the successes.

We took some steps toward writing a proposal at that time, but it didn’t go very far. I was new in my career and really didn’t have the writing or editing chops to envision it. Also, what turned out to be my first book was pressing at me to write it.

Years went by and my father still wanted to write a book. He worked with an agent who found him a writer, but the writer eventually left for graduate school or another commitment. Meanwhile, I’d been hearing my father’s stories about emails and phone calls he’d received from patients who weren’t being treated well and were looking for help. I was further along in my career and had been reporting about cancer and other medical fields, and realized how important this information could be for many more patients. I was sitting in the living room, just one person hearing it, and thought: People should know about this, and writing about this subject is something I do for a living. 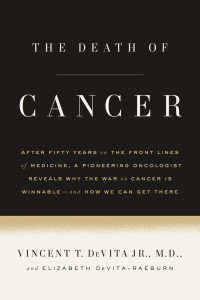 Now that I had finished my first book, I had more confidence and wondered if my father and I could write this book together. That was how we rejoined forces. We started working on the proposal before my first son was born and signed the contract on the day of his second birthday.

Could you describe your writing process?

The process was not linear. I did a ton of interviews with my father, which I transcribed. The first interviews were done in 2004 and 2005. Many times I would get him started talking and then turn on the tape recorder. He’s a great storyteller, and we just kept the process very loose at that point. I knew the general story and with these interviews I just wanted to get it recorded.

He wanted to write, too, though. So based on the interviews, I would send him chapter outlines and then he would write chapters and send them back to me. He tended to ignore my outlines, or sometimes they didn’t work. There was a lot of stream-of-consciousness writing happening, too. Basically I had a ton of raw material that I was trying to shape.

We did a huge portion of this book by text messaging. I would ask questions about a specific incident or ask him to fill in stories with more detail. I texted him through my computer while the manuscript was in front of me and he would text me back. Some of his replies were voluminously long. I never deleted any of them.

Then I would give him chapters and we would send edited versions back and forth to each other. Keeping track of different versions was heinous because there were so many. But in general we worked very tightly with each other. We were in communication all the time.

Did you have an intended audience for this book? Who were you writing for?

We thought there would be some interest among doctors and people in the field. But my father felt he’d been speaking to that audience his entire life and that there were a lot of inside stories about doctors and universities and how they work which patients didn’t know. It was time to talk directly to patients so that they had access to this information. It was always intended for a lay audience.

The book names a lot of names and includes some unflattering portrayals. Did you have to decide together about not being totally political?

Yes. There were some cases where names appeared unnecessarily—for example, people who appeared just once. If a name was included, it had to be because he or she appeared repeatedly or was representative of an obstacle. To justify including a name, it had to really belong there. There had to be a reason. So we toned down the first draft and made sure that whatever stayed in had a reason to be there.

Has there been any backlash to the book?

Surprisingly not. The lack of backlash may be because much of what my father says is really an open secret in the field. We were heavily lawyered, too.

Why did you have a lawyer and whose idea was that?

In case we were sued for libel. The lawyer carefully reviewed our phrasing and occasionally had us change the wording of something to protect us from lawsuits. I asked for legal review. I knew the publisher could do this in-house, and requested it because there were some inflammatory stories in the book. When they saw the manuscript, they agreed it was something they should do.

Were you concerned about trying to write in your father’s voice?

In the beginning, I agonized about this. I tried really hard, eventually drove myself nuts, and just sort of gave up trying to make it sound like him. I figured it would have the voice it has. And we went back and forth with the manuscript so much that his voice just got in. He has certain turns of phrase; he loves to say that something is “duck soup.” Once we started editing, those turns of phrase would creep in. I encouraged him and the more we worked, the better he understood to express himself the way he does when he talks. In most of the early versions, the basic structure of the story was written by me, based on our interviews. But once he edited and would add a phrase or an explanation, it became more of his writing. The book is very much a melding of the two of us. His voice and iterations are in there. It happened in the process.

Some of the patient stories related in the book are decades old—it must have been hard for your father to reconstruct some of those events. Did his memories start to flow more as you worked together?

Yes, and as he got the hang of the kinds of details I was looking for, I would ask him fewer questions. In the book he describes a patient with Hodgkin’s disease who he met early on, during his training. At first he couldn’t remember much about this patient and it was frustrating him. Then he started waking up in the middle of the night with memories. Eventually periods in his life for which he couldn’t remember any details would start coming back to him. Some things he already remembered very clearly because they were so formative for him as a physician.

Were you concerned about overlap with other books about cancer? How did you keep this book in its own bubble?

Together with our editor, we decided that we needed to stay with stories where my father was present. That is the main distinguishing factor of this book. He traversed the entire scope of the War on Cancer and has been present at all different important junctures. We kept the story tied to his experience, and it became a memoir. That also freed us from telling the whole history.

Did you do additional interviews or research to verify his stories or the science?

I did some extra interviews, but not too many. My father is solid on the science. When we discussed a particular piece of research, I would read the study and verify the facts and numbers. When it came to his point of view and remembrance, it was his memoir.

How did writing this book together change your relationship with your father and with your childhood memories?

I really grew up at the National Institutes of Health. My brother, who died of aplastic anemia, was hospitalized there for several years, one floor above my father’s office. So I was at that hospital every day. I knew many of the doctors, nurses, and cancer patients, but I didn’t know how they fit into this bigger story. And I knew my father had done something important, but I didn’t understand why he was there and how his work played out.

Having gone through this process, I’m much closer with my father. It’s a great gift to know your parents’ lives and understand them on such a granular level—what they hoped for, what they wanted, what they thought, their creative process. I have a window into understanding him that I would never have gotten had I not written this book with him. And it’s also a piece of my life that I understand in a completely different, adult way.

Both of your books have blended personal stories with science. Do you think science writing helps you process your own life experiences?

Yes, I think it has given me the tools for that. I write a lot of science stories that are not personal at all. But to write a book, I think you have to really be passionate or compelled by your topic, because it’s so much work and there’s such a gauntlet to run.

My curiosity is often driven by my own experiences, and I like to find the science that explains it. Narrative is such an important way to write about science. For me, personal experiences work for that. Sometimes I have a personal question that I need an answer to. I feel very fortunate to have these tools not only to make a living and do something that interests me, but also to understand my own life.

* Correction 3/24/16: An earlier version of this story incorrectly identified Vincent DeVita as chair of the Yale Cancer Center.

Jessica Wapner is a freelance science writer and author of The Philadelphia Chromosome. She lives in Brooklyn, New York. Follow her on Twitter @jessicawapner.