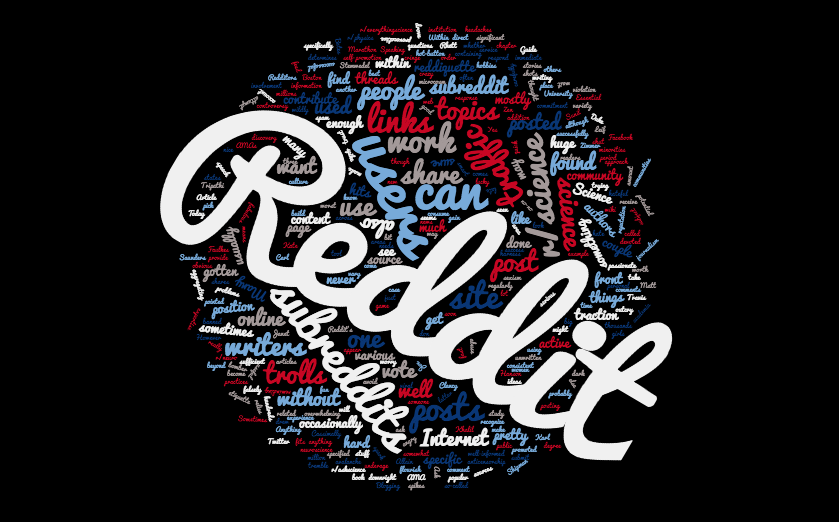 Science writers may tremble when they approach Twitter or Facebook, but many downright cringe when it comes to Reddit. This aggregating service relies on its more than 200 million users to post links and topics to various “subreddits.” Other users then vote the topics up or down, which determines both the topics’ position within the subreddit and whether they are promoted to the front page of the site. Within each post, users can comment as well as vote up or down on the other comments in the post. Article links that make the front page of Reddit will receive an avalanche of traffic from the site.

Some subreddits are obvious fits for science writing, such as r/science, r/askscience, r/everythingscience, and various more specific subreddits such as r/neuro (neuroscience) or r/physics. On some of these, writers can also become the direct subject of Reddit threads, with something called an AMA (Ask Me Anything). In these threads, writers take questions from Reddit users and respond to them, usually within a specified time period.

But with hundreds of millions of users and thousands of subreddits, Reddit can be a source of controversy as well as web traffic. In 2013, Reddit users falsely pointed to Sunil Tripathi as the Boston Marathon bomber. In 2011, the site only shut down a subreddit devoted to provocative shots of underage girls after public outcry. Reddit’s anticensorship position means that hate speech can flourish. The site can be a dark place for women and minorities.

Are the potential hits worth the headaches? The book Science Blogging: The Essential Guide drew chapter authors from academia, science journalism, and beyond to contribute their expertise. Today, we ask those authors if, and how, they use Reddit.

Matt Shipman: I have used it, but not to share my own posts (that’s a violation of so-called “reddiquette”). However, I’ve seen huge traffic spikes on my posts when others have posted them to Reddit. Are there trolls? Sometimes. But I see them (to some degree) on most (if not all) online communities.

[The wiki for Reddit etiquette (reddiquette) specifically states in its best practices that users should submit and vote on links from a variety of sources. If users post too much of their own content, their account may be banned as spam.]

Karl Leif Bates: Redditors occasionally pick up on one of our posts or stories and we see an immediate and very significant traffic spike (on the order of 40,000 [hits] sometimes). But we don’t, as an institution [Duke University], attempt to feed that community; we wait for it to find us.

Travis Saunders: I’ve occasionally posted things to Reddit, but haven’t gotten much traction. I have had a couple posts get really popular on Reddit without my involvement, and that drove a huge amount of traffic, which was nice. I’ve found that it seems hard to harness in any consistent way though.

Khalil A. Cassimally: Yes. Reddit has made a couple of my [posts] viral. It’s also a good source of news. r/science has a pretty [fabulous] community as well. [There are] many smart people on there.

Joe Hanson: I use Reddit mostly as a discovery tool, not to share my work. I know people who successfully do the latter, but it’s very hard to gain traction for one’s work there without serious commitment, because a) self-promotion is somewhat of an unwritten no-no there, and b) you have to be pretty active to build up sufficient trust to get people to recognize your work regularly. Or lucky. I’m also sure no one needs reminding about Reddit’s sexism and abuse problems.

Kate Clancy: I have used Reddit but mostly just consume [content] there. I find it a bit too overwhelming.

Carl Zimmer: I have done three AMAs. It’s fun and fast, although I haven’t gotten a big response from it.

If you don’t use Reddit, why do you avoid it?

Janet Stemwedel: I have found Reddit trolls to be some of the worst trolls out there. I have enough trolls in my online experience without Reddit.

Zen Faulkes: I worry about [using Reddit] because Reddit has a reputation of containing a lot of crazy, angry, hateful stuff, and I’m not sure I want anything to do with it.

Rhett Allain: I don’t share my work on Reddit because I’ve never had success doing that. If someone else shares on Reddit, it can be more successful.

Speaking for myself, I do use Reddit for some things. I often look at and contribute to subreddits related to my personal hobbies, for example. But I have found in the case of very active subreddits such as r/science, I’m not quick enough when posting links. Many of the links on r/science are posted as soon as the articles appear online, and I am usually late to the game.

Reddit is sometimes thought of as a microcosm of the Internet. And like the Internet, there are areas of Reddit most people probably never want to come across. In addition, the site has its own specific culture and hot-button topics, and these can vary wildly between one subreddit and another.

Many of the users in subreddits such as r/science are well-informed and passionate readers of science. Reddit can provide useful information and spark ideas. But like any new area of the Internet, it’s something science writers might want to study carefully before trying.