The photos below are samples from Rebecca Skloot’s notes as she tried to gain the trust of Deborah Lacks and other family members; Skloot’s description of this process appears starting on page 51 of The Immortal Life of Henrietta Lacks. (All photos and captions courtesy of Rebecca Skloot.) 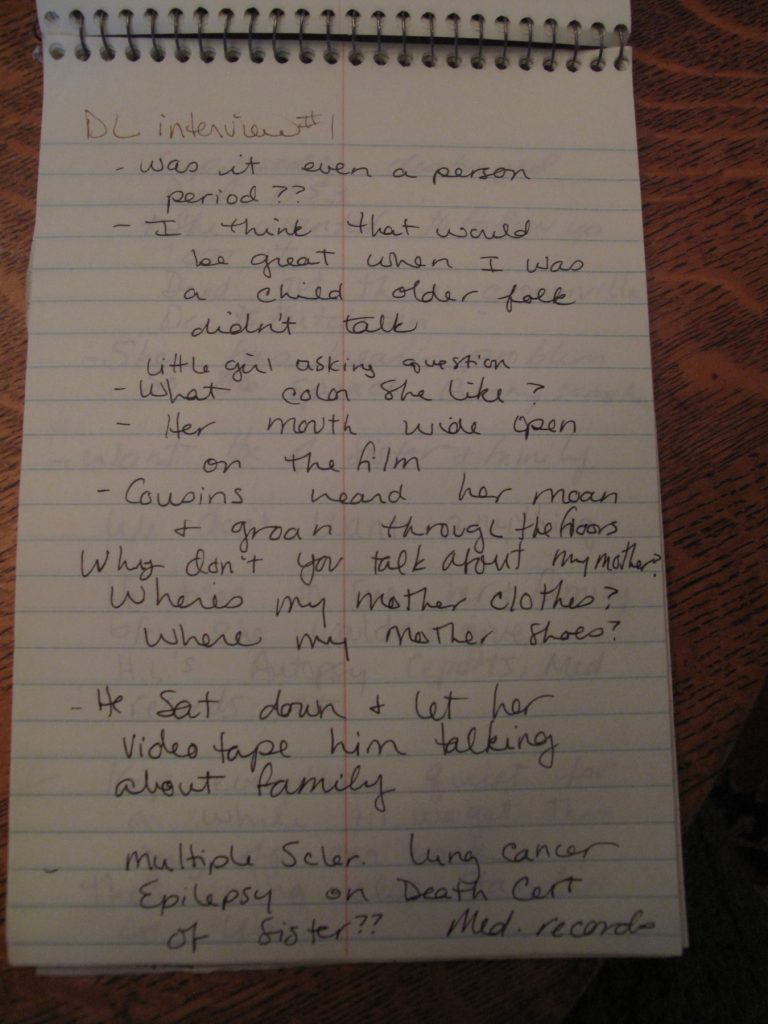 As I mention in the book, Deborah launched into a frenetic download of information during this call, which was a total shock to me.  I expected her to be resistant to talk with me, but instead she was ecstatic, giggling, thrilled at the idea of a book about her mother (though that would quickly change).  This page of notes is the beginning of an often confusing monologue of information that lasted for about an hour.  In these notes, Deborah tells me for the first time something she’d been saying to scientists for years, and something I’d hear many more times after:  She wanted to know who her mother was, what her favorite color was.  It’s also the first I heard about Deborah’s sister Elsie, who died in an institution at 15—our quest for Elsie’s story becomes an important part of the book in the third section. 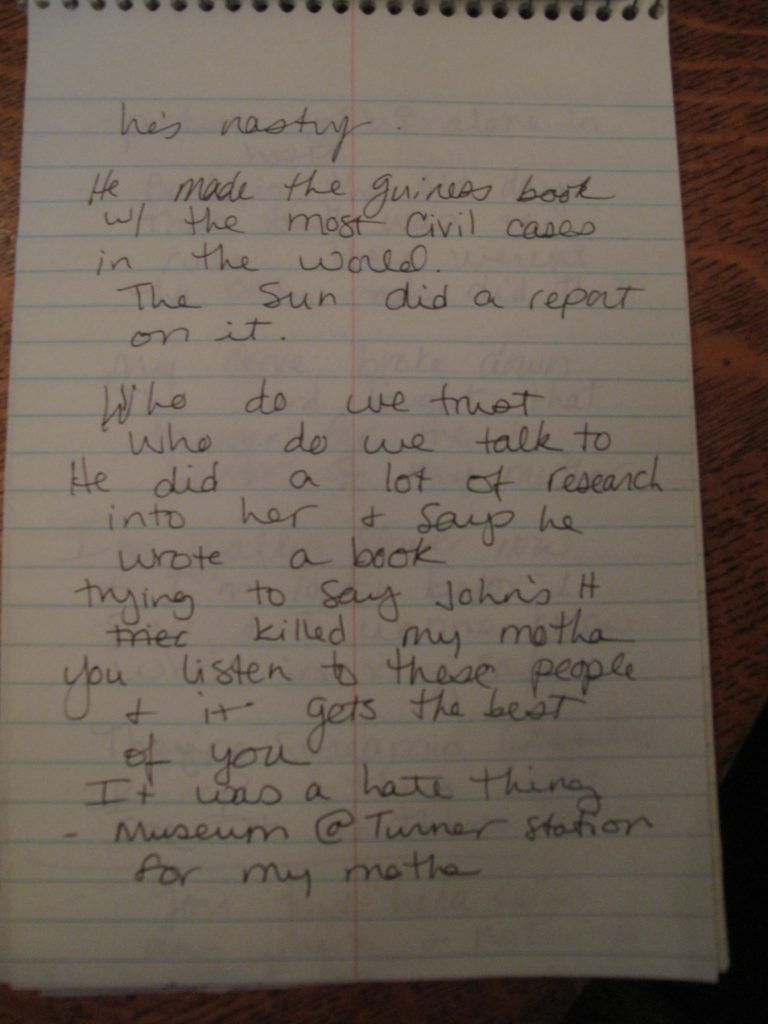 Here Deborah is talking about Keenan Kester Cofield—I had no idea who he was at that point, but his story is documented in the chapter “After London” … he was the con artist who posed as a lawyer and, among other things, tried to take copies of Henrietta’s medical records, then sued her children for access to them.  At the time of my first call, though I didn’t know it, all of that had just come to a head and Deborah was recovering from a near stroke from the stress of it all. On this page she says several things that I’d hear many, many times—it was like a mantra for her:  “Who do we trust” and she didn’t want the story to be “a hate thing.”  Here she’s referencing Cofield, who claimed that Hopkins killed her mother—he was driven by hate, she said, and the family fell into that with him for a while. 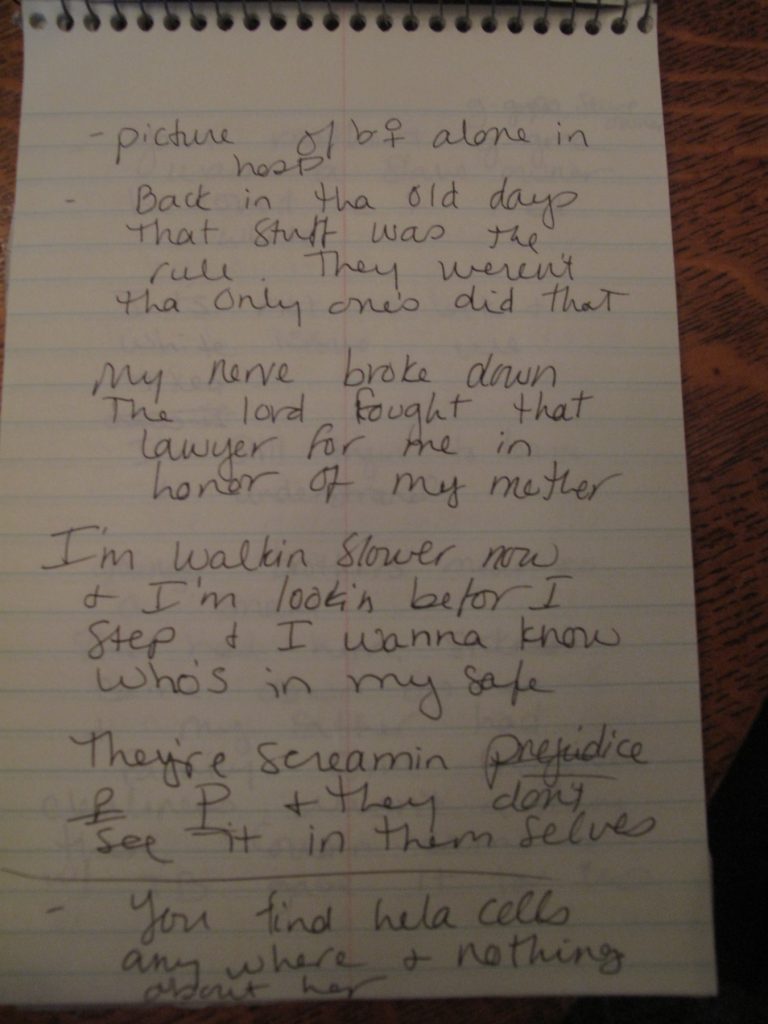 A few more of Deborah’s mantras appear on this page:  “I’m walkin slower now and I’m lookin before I step” is a reference to trust again, and the fact that she wasn’t going to just jump into something because she’d had so many bad experiences.  She also talks here (and many other places) about race and its role in the HeLa story.  “They’re screamin prejudice, prejudice, prejudice, and they don’t see it in themselves.”  This is a reference to a group of African Americans in Baltimore who’d been pressuring her to write the family’s story herself, and tell it as a story of racism and prejudice, which she always resisted.  She often said (as appears on the next page of notes) “It’s not a black and white issue. We mixed.”  Deborah believed that it minimized the story of her mother and HeLa cells to frame it as a story about racism.  She believed race played a role, but felt like it was just as much about class, and she often said, it’s a story about a black woman, but it’s also about anyone who’s ever gone to the doctor and had samples taken for research without their knowledge, which is pretty much everyone. 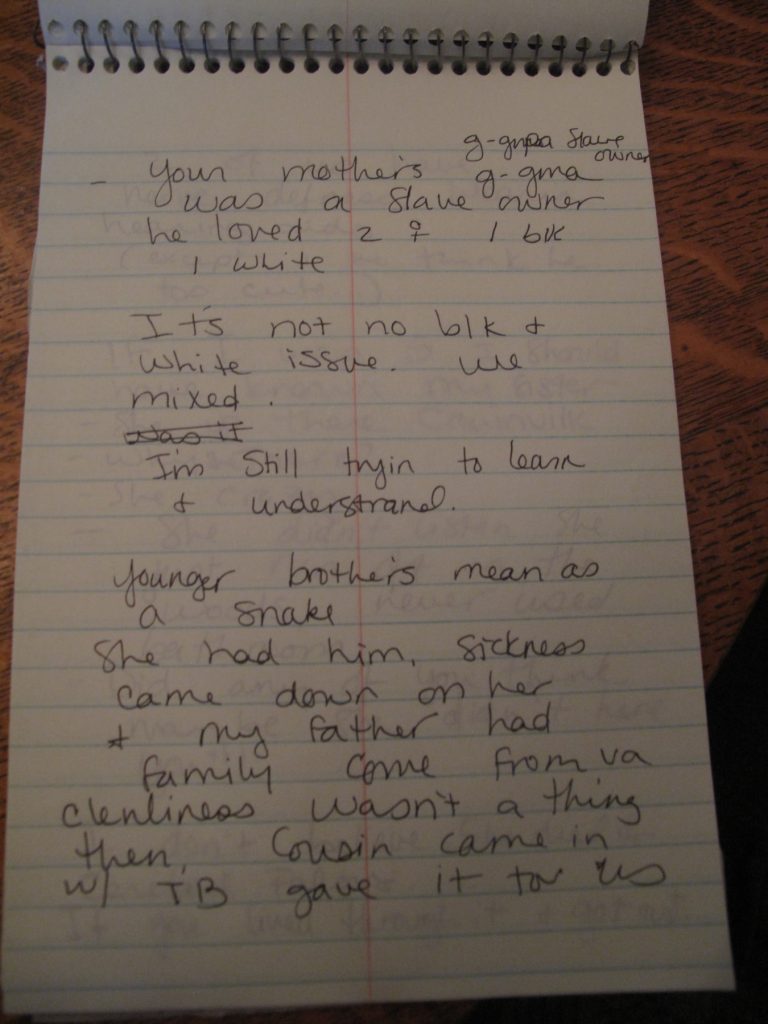 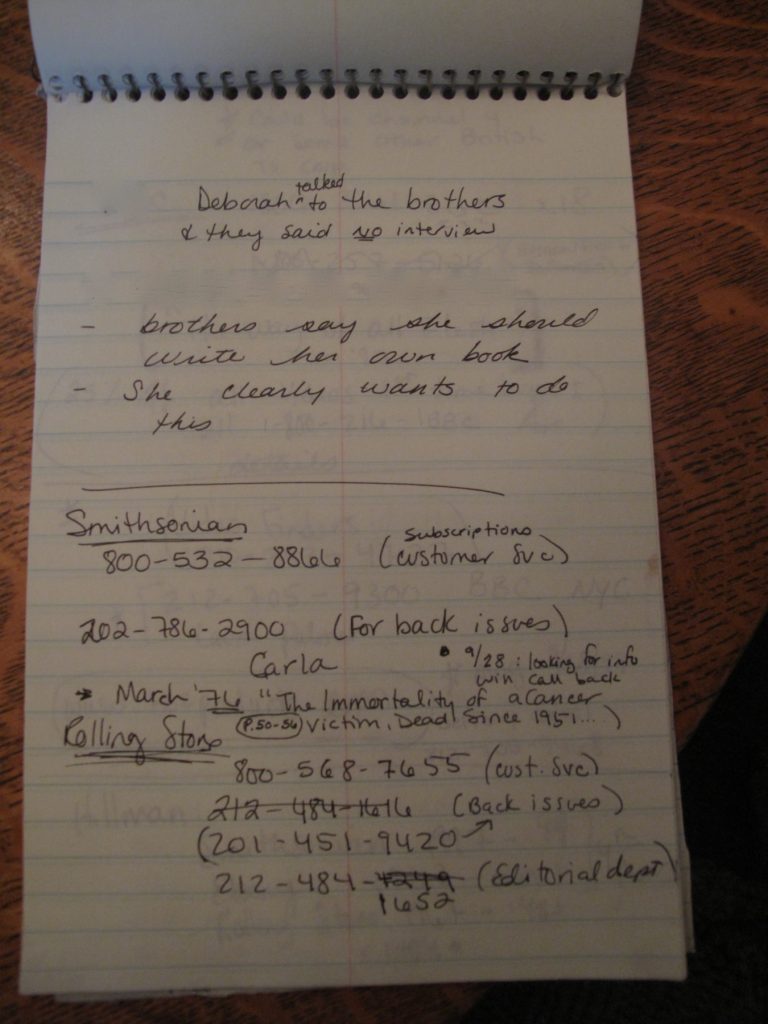 As I mention on page 53-54 of the book, at the end of this long and intense interview, Deborah told me to call her back Monday so we could talk more.  Then Monday came and she refused to talk to me (and wouldn’t talk to me for about a year and a half after that).  These are my notes from that call—I was in a bit of shock. The line here saying “she clearly wants to do this” refers to the fact that she made it so clear that she wanted me to write the book, and that she wanted to talk to me for it, but that she was scared (for good reason given her past experiences) and her brothers were pushing for her to write a book herself (to which she’d respond, “but I’m not a writer!”)  Hearing her desire to talk to me and her excitement about the book reinforced my gut feeling that I shouldn’t take no for an answer yet.At the bottom of the page, my notes as I began trying to try to track down a few journalists who’d written about Henrietta in the 70s. 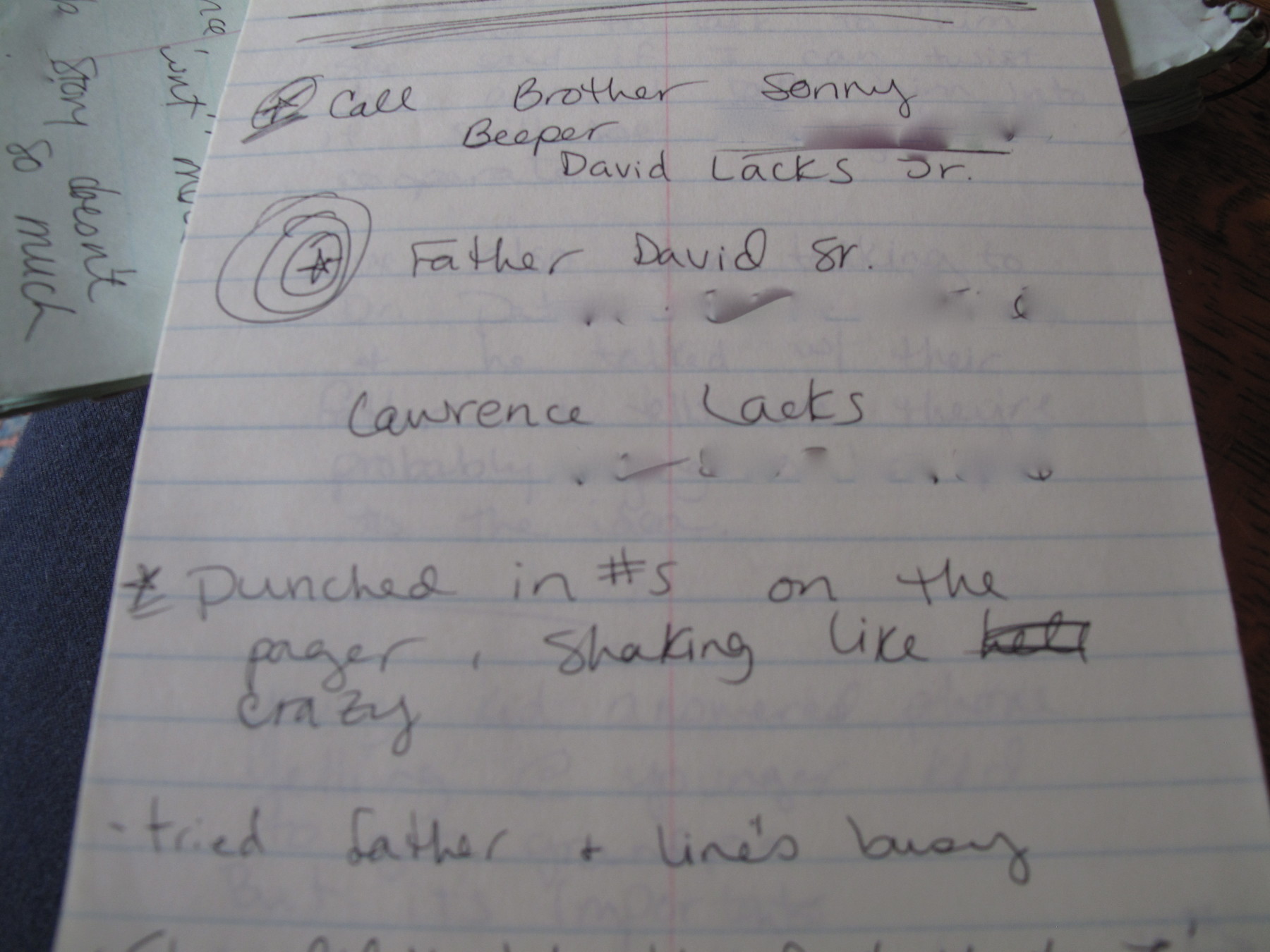 Before hanging up on me and saying she couldn’t talk to me, Deborah told I had to call her brothers and father and convince them to let her talk to me.  This is a hilarious page of notes where I document the fact that my hands were shaking like <strikethrough>hell<strikethrough> crazy when I dialed.  The line was busy, so there wasn’t much to report.  Why I felt the need to cross out “hell” and write “crazy” is beyond me. 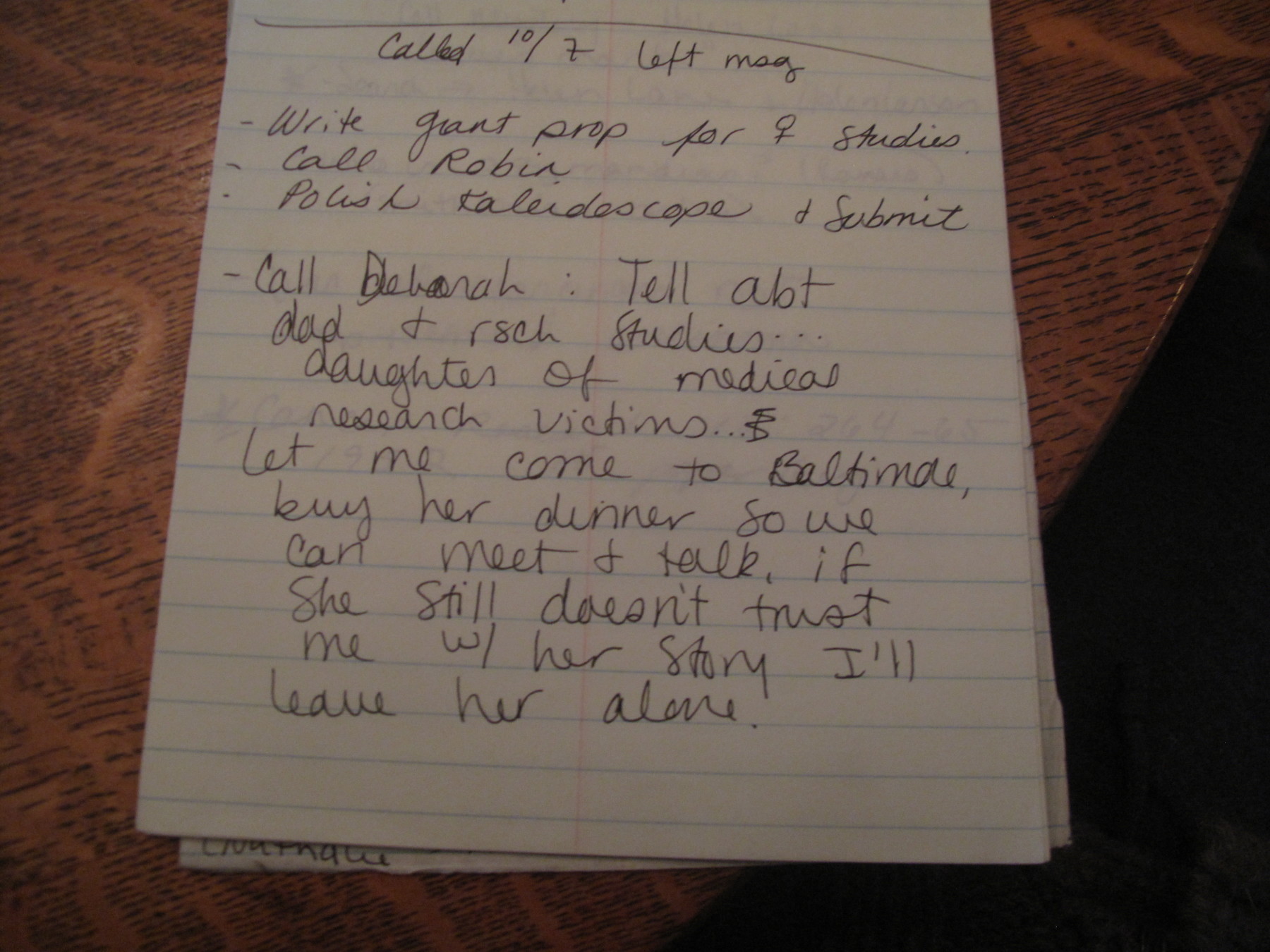 This is a note I wrote to myself after Deborah said she wouldn’t talk to me.  It was clear to me during our first call that she wanted to talk to me, but that she’d been through something traumatic (I didn’t know what yet) that made it hard for her to trust any journalist.  I mentioned during the interview that I believe it’s important for journalists to be open with sources about their own stories, which is certainly at play here.  I felt that if Deborah could get to know me, to understood me and my motivations, and if I made it clear I wasn’t going to hide anything from her, she’d trust me.  So I wanted to just sit down with her in person. In this note, among other things, I tell myself to tell Deborah about my own experience as a child whose parent was used in research (more on that story at http://rebeccaskloot.com/faq—click the question “What sparked your curiosity about the woman behind the HeLa cells and made you devote more than ten years of your life to writing this book?”).  I find it hilarious that I wrote this note to myself, since this was such a part of my thinking and motivation, it’s not like I was going to forget it or anything … Interesting fact for writers:  The notes at the top of the page are related to applying for grants to fund my book research, calling “Robin,” an editor I’d met who’d been very encouraging about my ideas, and submitting an essay I wrote called Kaleidoscope to literary journals … I was unpublished at this point and trying to get my first clips while beginning the research for the book—I knew I’d need those in order to get a book contract. 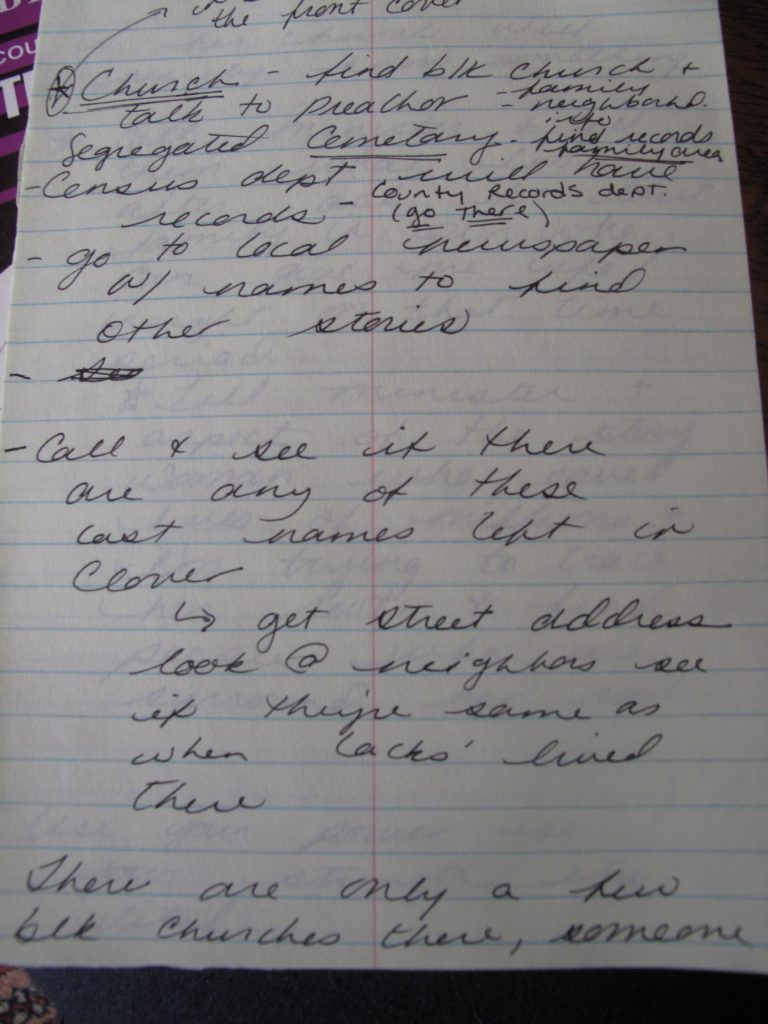 This is a page of notes from a conversation I had with Albert French, the novelist who encouraged me through the early hard parts of getting the story, and really pushed me to make the story of me and Deborah part of the book.  When I called to tell him that Deborah had refused to talk to me, I told him I wanted to track down her family’s history and share whatever I found with Deborah, because it was clear to me she wanted that information.  But I didn’t know where to start.  This is the first of many pages of notes I took in which Albert gave me a crash course on how to dig up African American history, which is very different from digging up any other kind of history in the US, because there was so little official record keeping, and so much was destroyed during the slavery and Jim Crow eras.  One piece of advice that turned out to be invaluable: Go to churches, look in the covers of bibles—that’s where the history is.  Talk to the pastors, tell them what you’re looking for, they’ll help you find it.  He was right.