Is This a Story? How to Evaluate Your Ideas Before You Pitch 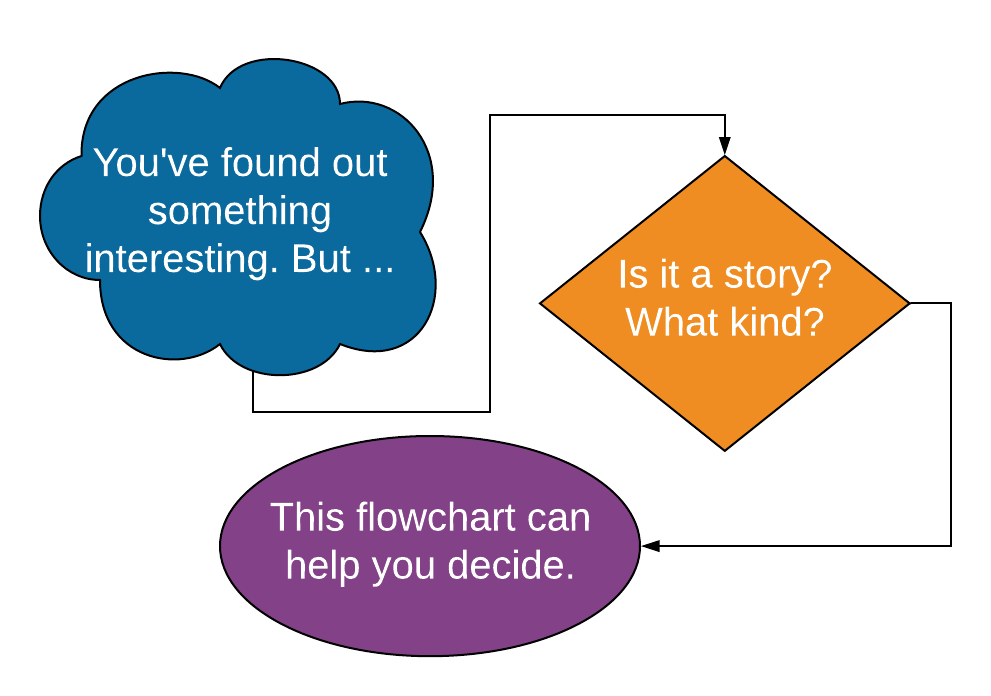 When a journalist is on the prowl for a new story, every yarn spun by a friend, every press release, every vacation adventure, and every quirky local news item can seem like the beginning of a great story idea. But most glimmers of inspiration turn out to be just that—transient inklings. Only a few will be real gems. The most successful freelancers can quickly sift through their ideas and see whether an idea deserves to exist as a story, and what kind of story to pitch. This evaluation is usually an intuitive process, honed over years of practice. But learning the right questions to ask about your ideas can help accelerate the learning curve.

The process always starts with a spark: Something seems interesting, and you want to learn more. “Interesting” can encompass a lot of characteristics. Francie Diep, who covers science for Pacific Standard, says when she scans her bookmarked sites she’s looking for anything that’s new, controversial, related to the news of the moment, or brings evidence to a debate that needs it—and stories about cute or weird animals are always good too.

Meera Subramanian, an award-winning freelance journalist and author, says she finds most of her ideas while reporting on other stories—by paying attention to moments when her sources bring up surprising ideas or her curiosity is piqued in some new way.

But no one’s “interesting” filter is completely reliable. “Sometimes you think you discovered something new and it seems fascinating; and then once you look into it you realize this has been completely reported, everybody else knows about it, this was just a new fact for me!” Subramanian says.

Jennifer Kahn, a contributing writer for The New York Times Magazine and an instructor at the UC Berkeley School of Journalism, says students often struggle with this problem—trying to get past their own initial interest to evaluating whether an idea will be compelling to others.

“It’s not enough for something to be surprising or interesting. You have to think about why it’s interesting,” Kahn says. “The number one thing, at least with students moving from intro to more advanced classes, is that people have stumbled on something they randomly find fascinating—‘Oh my God, it’s a woman-run mosque,’ or ‘Oh my God, the falafel guy is actually from Syria,’ and they are kind of curious about this. But there’s no interrogation of what actually makes it so interesting to them.”

Beginning writers are usually able to easily identify topics or people they want to learn more about, but can sometimes get stuck on the surface—they don’t know how to dig down to find out if there are fundamental questions about them that a lot of people would like to know the answer to.

To Find the Right Scope and Format, Report

Once you’ve determined that something truly is interesting, and why, the next step is deciding what kind of story this interesting idea points toward. Is it a magazine feature story? Is it an online news story? Is it a profile? A Q&A? An infographic? Or is it something else—or nothing at all? This moment of decision is when it’s often critical to start reporting and get input from potential sources.

When essayist, editor, and science writer Jaime Green is trying to decide the scope and format of a story, making phone calls early on is an important step. She says it comes down to whether talking to an expert “opens more doors or closes the doors that are open,” she says. “Can I talk to someone and say, ‘Oh, OK, cool, I get it now,’ or does it raise new questions? Are there more people I want to talk to?”

If this pre-reporting makes the story get smaller instead of bigger, it’s probably an indication that the idea may not be feature material. But that doesn’t mean it’s not a story. Some magazine front-of-the-book sections might require that an idea pass the test of being some combination of interesting, surprising, new, important, and (depending on the magazine) quirky, but it doesn’t need to be complex. A print or online news story needs to be new and significant, but the human element isn’t essential. An essay requires a thought-provoking question, the answer to which will come from the writer’s reflections instead of or in addition to their reporting. Successful scientist profiles generally require that the subject’s personal story is as interesting as their research.

All of this preparation and decision-making can be exciting—you never know when you’re hot on the trail of your next big story! But it’s also taxing, and, for freelancers, unpaid. Developing criteria to evaluate ideas can make the process a little more efficient and economical. Every writer will eventually have his or her own ideas about the best way to do this, but learning from others’ experience can help you get started. Below, we present a flowchart created from interviews with the experienced writers mentioned above, as well as other journalists TON has previously interviewed. The chart guides you through some of the questions you can ask yourself the next time your “interesting” alert goes off.

Mallory Pickett is a freelance journalist based in Los Angeles. She mostly covers science and technology, and she has written for The New York Times Magazine, Wired, FiveThirtyEight, and other publications. Follow her on Twitter @MalloryLPickett.