Now Peep This! Announcing the Winners of #PeepYourScience 2020 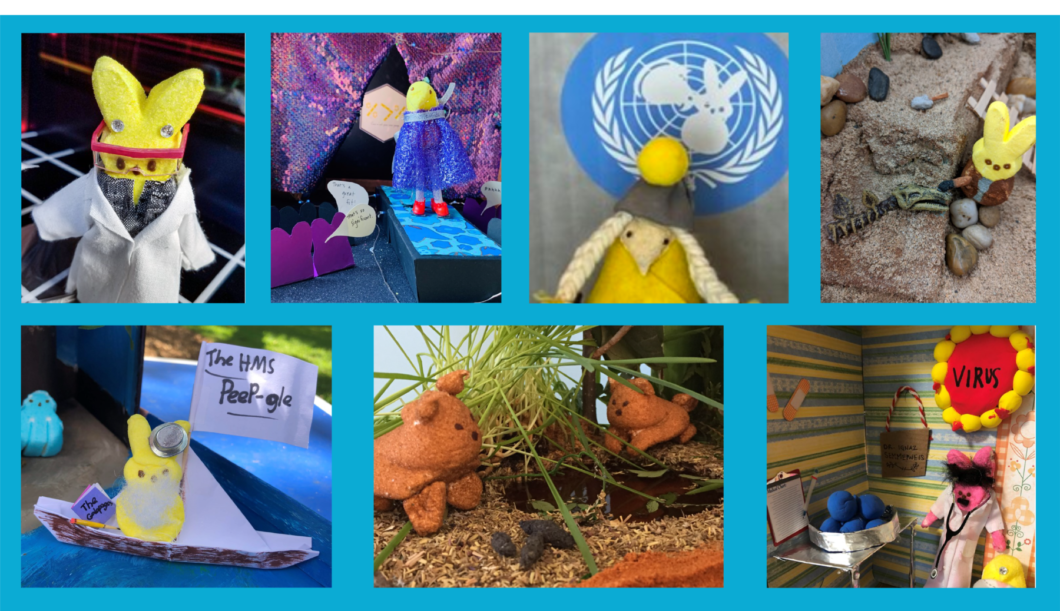 They had us at “That’s so significant” and “That’s a great fit!”—that’s what Peeps data scientists say when they see a great model walking down the runway. Then they had us giggling at a poop-sniffing Peep pup who tracks jaguars in the Argentpeepa forest. They wowed us with a passionate portrayal of young women activist Peeps … entranced us with an historical peepspective on the importance of hand washing … and awed us with the almost alchemical transformation of peeps into foam, … and on, and on.

A Huge Thank You to Our Judges!

Our six judges weighed the scientific and artistic merits of more than 70 #PeepYourScience entries with passion and integrity. These VIPeeps are:

We could spend days extolling the peeptacular virtues of every marshmallow creation submitted to the second-annual World’s Finest Science-Themed Peeps Diorama Contest.

That’s why we had to bring in a team of judges, as talented as they are wise, to make the tough decisions and award the coveted Golden Peep—and other prizes, including a delightful set of honorable mentions. The peeple have also spoken, with their votes to determine the winner of the Peeple’s Choice Award. (NB: The actual trophies and honorable-mention certificates will be sent to winners after the creators of said trophies can meet up to assemble the prizes.)

And now, we present the #PeepYourScience 2020 winners and honorable mentions!

A Peep into the Life of a Data Scientist

From the crafters: Our diorama captures four key data science tasks: data cleaning, data wrangling, data modeling, and data delivery. In each scene, the bunny peeps are the data scientists, and the chick peeps are data. The first scene represents the bulk of the work of data scientists, data cleaning. The second scene further depicts the data scientist’s task of taming messy data, or data wrangling. Sometimes data are missing, hence the “Wanted” chick peep sign. Once the data are ready to be analyzed, the data scientist will use statistical models to answer a question. In the data modeling scene, a chick peep takes on the runway before an audience of bunnies. Finally, when it is time to tell the world about scientific findings, a data scientist will deliver this information in the form of a journal article, represented by our bunny “stork” delivering articles (about positive end-expiratory pressure – PEEP).

What the judges said: This project was clear and creative. One judge reported that she ran it by a data scientist who agreed that it was accurate; other judges gained a new appreciation for the work data scientists do. All four scenes were carefully constructed, with delightful details and a good use of Peeps, and the metaphors were both appropriate and funny.

From the crafter: If a carnivore poops in the forest and no one’s there to see it, what’s it take to be found? Answer: Train, the conservation dog! He works with biologist Dr. Karen DeMatteo surveying Upper Paraná Forest in Misiones, Argentpeepa. It’s a biodiversity hotspot and the largest of this ecosystem left on Earth. Native carnivores such as bush dogs and jaguars avoid humans, but Train’s expert nose finds their poops, which Dr. DeMatteo collects for genetic analysis. With GIS mapping she can track each animal’s travels. As pine and eucalyptus plantations fragment territories of these peeps, the aim is to determine suitable habitat corridors for them. Peeps involved: Christmas trees line the agricultural side; bunnies, chicks, and their parts became all the animals. Repurposed materials include: laundry lint, dental floss, fajita & tandoori seasonings, our house rabbits’ poops, a mini cow bell from Switzerland, toothpaste, old coffee, live grass, bouquet greenery.

What the judges said: A high level of detail helps tell the story here—we particularly appreciated the contrast between the wild jungle and the pine plantation (as well as the forethought in saving holiday Peeps to make trees). Creative use of Peeps to make the pup and the animals, and the other materials (including the actual poop) were well-sourced and effective. The entry was also very well photographed for presentation.

Chicks Save the Planet

From the crafters: “Chicks Save the Planet” highlights the wave of youth activism around the world calling attention to the global emergency of climate change and ecological disaster. In the center of the diorama, Greta Thunberg takes the case to the United Nations, while (upper right) Amariyanna Mari Copeny continues her campaign attention to the ongoing water crisis in Flint. Upper left shows 8-year old Indian activist Licypriya Kangujam, who began calling out the Indian government when she was six. Dismayed by adult inaction, young people around the world make clear that the time is now to act. The three young women activists are depicted using “chick” peeps. The United Nation General Assembly is complete with delegates from around the globe, some listening intently while others not, country flags, Paris Climate agreements, translation headphones, and the Peep United Nations logo. President Trump is waving the U.S. flag, proudly rejecting the Paris climate agreement.

What the judges said: We were highly impressed with the costuming and other set details. The diverse young activists were thoughtfully portrayed, and the array of UN attendees was carefully constructed (we particularly liked the details of the flags and headphones); the use of photos of protest posters in the background added a nice layer of context.

From the crafters: Ignaz Semmelweis was a doctor and scientist. He discovered that most women were dying after childbirth because they were getting sick from cross contamination. He discovered that if you wash your hands with soap, you can kill the germs. Soap breaks up the fatty layer around a virus. Our diorama is a nursery with babies. On the wall there is a mural of a virus and the soap killing it. Dr. Semmelweis is standing by a sink full of soapy water.

We learned that Dr. Semmelweis discovered how to help people not die from germs. We also learned that viruses have a fatty layer and that soap is hydrophobic and tries to lodge itself in the fatty layer.

What the judges said: This project was timely, but with a historical perspective that the judges appreciated; some of us learned about Dr. Semmelweis for the first time thanks to this topic. Close attention to detail, including the fact that the soap bubbles in the sink are the same ones attacking the virus in the diagram on the wall. Also, the baby Peeps have pacifiers, which is amazing.

Most Accurate Representation of Science:

From the crafter: As an epidemiologist, I wanted to make a Peep scene of the famous moment that John Snow removed the handle from a water pump at Broad Street, London, in 1854, and is credited with stopping a cholera outbreak. In light of the COVID-19 pandemic, and the amazing data visualization regarding its spread, I also wanted to highlight the map that Snow created to convince others the outbreak was centered around the Broad Street pump. I’ve recreated a portion of the map using peeps to represent cholera cases. Additionally, there is a scene of Dr. Snow with the pump handle, Reverend Whitehead who helped investigate, William Farr, the London demographer who believed in the miasma theory, and Mrs. Sarah Lewis, who washed cloth diapers from her sick infant, and tossed the water in the cesspool in front of 40 Broad Street, likely starting the outbreak. (Ref: The Ghost Map, Steven Johnson)

What the judges said: The use of the map, with Peeps representing cholera cases, surrounding the well-constructed historical scene was a great touch, incorporating the supporting data in an innovative way.

Best Use of Peeps:

From the crafters: At Chemical & Engineering News, we were delighted to see chemistry take center stage during the recent Miss America competition. For the talent segment, Camille Schrier of Virginia performed a popular chemistry demonstration known as “elephant toothpaste,” in which hydrogen peroxide and dish soap mix with a catalyst to create tall spouts of colorful foam. The feat impressed the judges, and she was crowned winner shortly thereafter. Although our Miss Ameripeep is equipped with the same lab coat and hot-pink safety glasses as Camille, we elected to skip the laboratory chemicals and used Peeps to form the billowing foam instead.

What the judges said: This unexpected theme was beautifully illustrated with Peeps both in their original form, and turned into Miss Ameripeep’s chemistry demonstration. A creative and effective use of sugary marshmallows.

From the crafters: Our diorama depicts Charles Darwin’s arrival to The Galapagos Islands on the “HMS Peep-gle!” Darwin noted unique species on the islands, such as Galapagos Tortoises, Sally Lightfoot Crabs, Galapagos Penguins, Blue-Footed Boobies, Frigatebirds, and Galapagos Sea Lions. It was Darwin’s 5-year journey around the world that led to his theory of evolution, which explains how species evolve over time through a process called natural selection.

We used acrylic paints to turn a shoebox into an island scene. Darwin is aboard the ship. He has a beard and a hat, and next to him is his notebook and pencil, since he took detailed notes during his voyage. We created the animals using different colored peeps. Above the box, we have a thought bubble that shows the evolution of Peepkind. Peep ancestors had long tails and no ears, but over millions of years evolved into the Peeps we know and love today!

What the judges said: Excellent use of puns, both visual and verbal, to illustrate this moment in science history. The composite Peep animals were delightful, and the diagram of the evolution of a bunny Peep was both creative and informative.

Most Architectural Use of Marshmallows: Galipeepo’s Principle of Equivalence

What the judges said: The leaning tower of mini-marshmallows was perfect for this scene, and enjoyed by all the judges.

What the judges said: Lots of Peeps here, and good use of three-dimensional space; an evocative commentary on a political theme.

What the judges said: The judges thought the aesthetic here was great, almost a political cartoon in marshmallow form.

What the judges said: So much creativity and detail in this speculative look at a potential future.

What the judges said: The young artist’s passion for science was on display in this wonderful first effort, using the traditional shoebox form with a few out-of-the-box twists.

What the judges said: Peep beaks = fossil teeth? Amazing. We wish we could have learned more about the artist’s work before the pandemic intervened, closing school and prematurely ending diorama-preparations.

What the judges said: A philosophical and thought-provoking description for this charming look at the development of embalming techniques.

What the judges said: The excellent use of three-dimensional space (plus marshmallow jellyfish) led the judges to choose this project from among the many wonderful examples of Science Heroes submitted.

What the judges said: The certificate title speaks for itself! (Also, we were impressed by the careful crafting.)

What the judges said: The tiny paper bags shown in each step of the process, plus an unknown (to many of the judges) woman inventor—very informative.

What the judges said: Well-chosen use of Peep parts, and a pithy description.

Read all about The Open Notebook‘s #PeepYourScience contest here. See the full galleries of 2020 entries here and here.