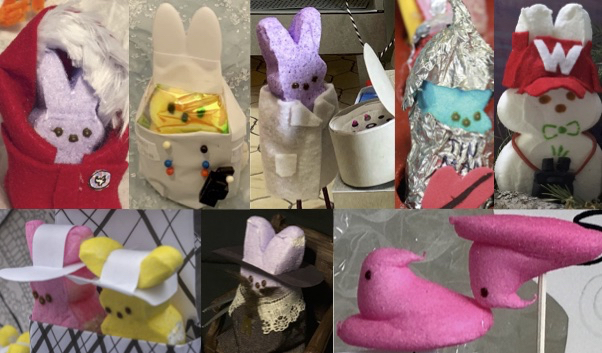 Interested in talking with the peeple behind this confectionary event for a story? Sure, we’d love to talk about Peeps!

The first “Peep”eration with ether.

All monumental advances in science—with a marshmallow twist. These are just three of the 50 dioramas created by science-minded crafters and entered in the first-ever World’s Finest (and Only…As Far as We Know) Science-Themed Peeps Diorama Contest.

Our gallery of the sweet tableaux is now open, and anyone can vote (through April 14) for their favorite to win the highly coveted Peeple’s Choice Award. [UPDATE: Voting has now ended. The winner of the Peeple’s Choice Award, as well as judges’ prizes, will be announced on Tuesday, April 16.]

But know this: It will be a sticky decision. After all, how does one choose between a peepephant and a peepguin … between Peepola Tesla and Dimitri Mendelpeep … between competing visions of Rembrandt’s The Anatomy Lesson of Dr Nicolaes Tulp rendered in the medium of marshmallows?

These are questions for the ages. There’s one thing, however, that’s as certain as Easter candy arriving in stores the day after Valentine’s Day: These confectionary artists did not lack creativity or in their flair for puns.

The science-themed contest is the brainchild of Joanna Church, Helen Fields, and Kate Ramsayer, an award-winning trio of peep diorama makers from the Washington, DC, area. It’s hosted by The Open Notebook, a nonprofit publication whose mission is to help science journalists sharpen their skills (now, naturally, including their Peep-crafting skills).

Joanna, Helen, and Kate got their start submitting diorama entries to The Washington Post‘s famed—and sadly now defunct—Peeps diorama contest. When The Post ended its contest in 2017, Joanna, Helen, and Kate entered a few other contests, but decided that a more efficient way to spread Peeps-related joy would be to hold their own. Helen and Kate are both science writers, so science was an obvious choice for a topic. Siri Carpenter, co-founder and editor of The Open Notebook, shamelessly begged and pleaded, and considered bribery and even blackmail, to host the contest.

What the Peep is a Peep? 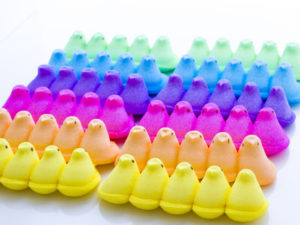 In case you’ve missed out, Peeps are marshmallow treats shaped like bunnies or chicks and covered in colored sugar. While challenging to craft with (pro tip: put vegetable oil on your knife blade before cutting), Peeps make strangely compelling characters for dioramas. Peeps diorama contests abound, but—again—ours is the finest and also the only (we’re pretty sure) one with a science theme.

The rules for our science-themed contest were simple: Make a free-standing diorama that features Peeps and depicts a science-related tableau. It could be a depiction of anything—a famous “Eureka” moment, a well-known scientist, field work or life in the lab, or even creative uses of Peeps to explain scientific processes. All sciences, from physics and astronomy to social sciences and engineering, were welcome.

And the peeple delivered! The 50 dioramas entered into the contest cover a huge range of scientific topics, from subatomic physics to ecology. Entrants include scientists, science writers, fine artists, elementary and high school students, and more.

GO TO THE GALLERY

Will You Help Support The Open Notebook?

Peeps dioramas are ridiculous—the more ridiculous, the better! But The Open Notebook also has a serious purpose. At a time when both science and journalism are under threat, we help science journalists all around the world do good work. Publishing TON costs more than $2,500 a week. If you’d like to help support our work, please consider making a tax-deductible contribution to help us keep it going. Thank you!